Tracy Umezu always imagined having a large family and a home filled with children. But after losing one daughter to a rare genetic disease in 2016 and another due to a severe pregnancy complication in 2018, the Minnesota mom and her husband, Junji, made peace with being parents to an only child.

Now, the family is sharing the story of their adoption journey, which led them to their son, Jacob, born in February 2021.

Charlotte, the family's second child, was born with SCN2A, a rare form of epilepsy, in 2014. Because they knew Charlotte would die within a few years of her birth, the family created a "joy list:" Activities they wanted Charlotte to enjoy in her short lifetime.

"We wanted to fill her life with as much joy as possible while she was here," Umezu told TODAY Parents, "so our family and friends made a list of things we wanted her to experience. We went to Hawaii, I pushed her in the Twin Cities marathon, we went to the zoo and had picnics."

In November 2016, Charlotte was seizing uncontrollably and the Umezus made the difficult decision to withdraw life support.

"She was suffering more than she was enjoying life," said Umezu. "No medications were working, and she passed away fairly quickly."

Because they struggled with infertility when trying to conceive Charlotte, the Umezus began fertility treatments to have another child a few months after Charlotte's death. One year later, Umezu learned she was expecting twins.

"The second baby’s heartbeat stopped after 10 weeks, but I carried Maggie with relatively no complications," Umezu said of her third daughter. "Then at 34 weeks, I lost consciousness and passed out on the floor at home. I almost didn't survive. I had a complete placental abruption and Maggie died probably instantly."

Because Umezu's doctor cautioned her not to become pregnant again, her husband brought up adoption. 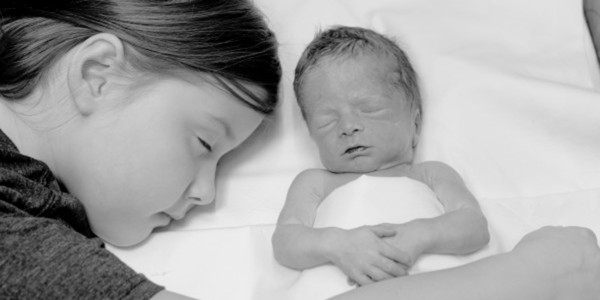 "I had to come to a place where I didn't define my worth by the number of living children I had and knew I was still a good mom whether I had one living child or five," Umezu, who also has a 9-year-old daughter named Sophie, explained. "I got to a place where, while it wasn't the life I'd dreamed of, I knew there was more we could give our daughter if she was our only living child we had. I knew I would be OK if we just had Sophie."

In 2019, Umezu visited Israel with her church parish and the priest who helped counsel her through her grief. On the trip, she thought about her husband's adoption idea.

There was a series of coincidences. Charlotte's nurse was on the trip. And the group met a doctor who helped families with the adoption process. Umezu began feeling at peace with adopting.

"I felt like I was being told adoption was for us," she said. "I came home knowing I wanted to adopt, but thinking if it worked it would be an amazing journey and if it didn't work I would come out OK and be fine. I'd be disappointed, but I'd be OK."

The Umezus moved through the process, receiving the final approvals they needed in November 2020, during the week of the anniversary of Charlotte's death.

In February 2021, they received a call about a 2-day-old baby boy in a Florida NICU who needed an adoptive family.

"I talked to the birth mother on the phone that night, and she asked if we would keep the name she had given him," said Umezu. "I knew we would honor her in that way."

"She said it's 'Jacob Benjamin,' and Jacob is the name we have always had in mind for a boy," said Umezu. "It was a pretty telling piece that this was meant to be for both her and for us."

The family flew to Florida to bring baby Jacob home.

"Meeting him was this overwhelming rush of emotion knowing we had been bestowed him to love and care for and to give him the best life we possibly can," said Umezu. "But, mixed in there were the sounds of him crying like a healthy baby would cry or feeding like a healthy baby would feed and there were little pangs of, 'This is what I missed with Charlotte,' and, 'This is what Maggie would have looked like if she had come out breathing.'"

Since bringing her son home, Umezu says she's experienced a deep and unique love that's brought healing to her family.

"It's impossible to describe," Umezu said. "It's a gift that, because we've gone through so much, we appreciate even more."

"Knowing that life can come out typical and normal and healthy is so awe-striking to us after all we've been through," she continued. "To look at him and know he has a brain that isn't seizing and lungs that are breathing and a heart that is beating is such a miracle to us. It's an overwhelming joy."

Terri Peters is a writer and editor for TODAY.com. She lives in a small beach town on the Atlantic coast of Florida with her husband and two kids. When she isn't writing, she can be found at the beach or exploring Florida's theme parks with her family.